Siren Williams: My salty life between surfing and music

Siren Williams about her home and surf life

Hi Siren! You are from Cocoa Beach in Florida. Tell us a bit about your home town…

I was raised all over Florida, but moved to Cocoa Beach after high school and made it my home. Currently I’m actually not there. I bought an investment property a couple of hours north and I’ve been here for 2 years, but we’re ready to sell it and we’re not sure where we are going from here. But even with all of that, Cocoa Beach is still home to me because that’s where all of my friends are, my husband’s family, and I know everyone in that tiny town. That’s my town!

I love Cocoa Beach passionately. Those people are my tribe. Back in 2007, I actually wrote a song called “Lovely Cocoa Beach”, so I’d say it definitely influences me and my music. I think that just being around people that you love and surfing every day, and that strong sense of surf community that we have in Cocoa Beach, really inspires my writing.

Surfing and being close to the ocean, what do those things mean to you?

It’s my life! I really don’t know any other way. I’ve lived near the ocean my entire life, with the exception of a few months in high school, so it’s just part of who I am. I don’t know who or what I would be if I lived in the middle of the country. Maybe I’d be a farmer…???

You used to be a professional surfer. How was your last WSL event?

I still do surf professional contests, primarily in Florida, but WSL actually went several years without holding a single North American qualifying contest for longboarding. So neither my husband or myself could even do a WSL QS [eds. note: Qualifying Series], because there wasn’t one. It seemed so unfair, as we aren’t getting any younger! My husband [eds. note: pro-surfer Brandon Russell] has already toured and done all of this, qualified for the world contest and couldn’t afford to even go do it, so I wanted to do the WSL events with him and give him that opportunity again. 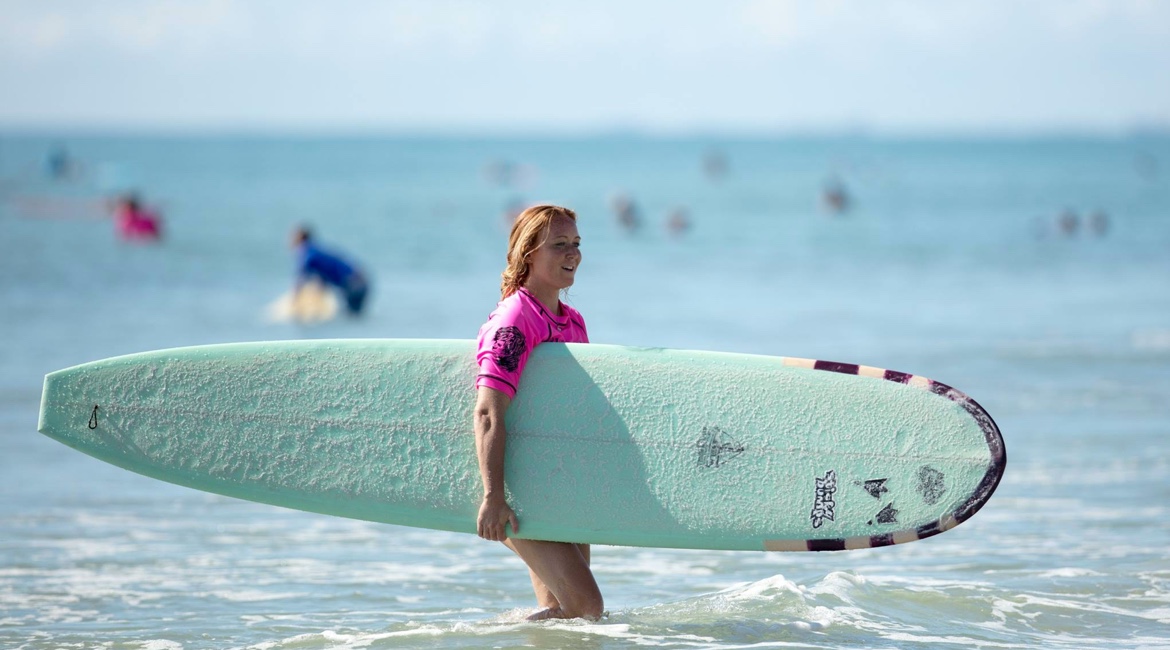 A QS event was finally scheduled at the last minute last fall, so we spontaneously took all of our money and drove across the country to California for this contest, and once we got there, they cancelled it because there were no waves. We stayed for a month anyway and returned home broke. Hahah.. There is a QS confirmed for this November and we plan to be there!

Surfing and music: Do you think they somehow belong together?

There are so many great musicians, and so many great surfers, but there aren’t nearly as many who pursue both. I think that’s because they are so different, it’s a really special thing when you do both. The community of surfer-musicians is relatively small, so it’s unique and it’s just a really cool thing! However, I get so many tunes in my head when I’m surfing and I’m so inspired by it. So for me, they do go hand-in-hand. But I might speculate that a person with rhythm could potentially use that to his advantage in surfing…

We love your tunes, Siren! Since when are you creating your own music?

I was always making up songs as a little girl, even as early as six or seven years old. But it wasn’t until I started playing guitar, when I was thirteen, that I actually started writing songs. At around age 19, I really started more seriously and entering singer-songwriter contests and was winning. So I slowly began playing more in public, opening for other musicians and booking gigs as part of a duet. In just a couple of years’ time, I was booking loads of gigs, I was playing at festivals, and even played a ticketed show. I gained a lot of momentum in a short period of time and things just started falling into place, and I was really busy with bookings so I went with it!

What or who is your greatest inspiration?

My greatest inspiration is Mother Earth. I used to think that it was the ocean and traveling that inspired me so much, but the more I look at it, the entire natural world inspires me! I’m inspired by the weather, the trees blowing in the wind, the dolphins at the bow of the boat, and the beautiful places around the world that I’ve been…

Is there some kind of typical process when you work on new songs?

I used to get a little tune in my head, almost like I could already hear the song in its complete form, with the melody and the music. I would usually try to hum or sing as much as I could into the recorder on my iPhone and then later try to work it out on the guitar, and write lyrics to fit that melody that was in my head. But if a song doesn’t come to me like that, I might start with just forestalling something on the guitar and then writing lyrics to lay over it.

What kind of stories do you want to tell in your songs?

I have a lot of love songs, songs about surfing and hurricanes, traveling… And then I have really strange concepts, too. Like a song about a salt crystal that travels the world by ocean, or a song about how feathers fall off birds and how sad it is, because they wanted to be part of an Indian headdress and now they’re lying on the street. I personify odd things a little bit sometimes 😉

Of all your work, which song will always stay in your mind?

Oh gosh. I’m not sure. Maybe ‘Turquoise’? It’s not released officially, yet. That’s the song about the salt crystal that travels around the world by ocean, washing up on beautiful beaches, looking down below at the reefs. I connect that song with a horrible experience, actually.

I was living in Costa Rica and was working on the song for a swimwear company’s brand video. They wanted it to be around 5 minutes long and I had to play the entire song on the ukulele without messing up. But there were so many mosquitos in our little shack that we lived in! I literally had to let them bite me, because I couldn’t stop to scratch if I was going to play and record the entire uke track.

A couple of days later I fell deathly ill with Dengue Fever and thought I was going to die. A week later, still feeling absolutely awful but significantly better and happy to be alive, I recorded the entire song. So in a way, it’s the song that almost killed me!

What kind of music are you listening to?

I can’t decide! One minute I’m listening to Led Zeppelin, and the next I’m listening to ODESZA. I’ve been listening to Bossa Nova a lot while I cook. It’s become a ritual, but it sort of makes me want to drink wine 😉 I appreciate so many types of music, and it all depends on my mood and what I’m doing. I love punk rock and hardcore shows, getting in mosh pits and getting wild, and I also love listening to Beethoven on vinyl while I clean the house. The other day I was blasting some hip hop in my car, got bored with it and turned on some weird space/celestial inspired keyboard music. Yes, I might have attention deficit disorder…

Siren Williams about her passions and future plans

Besides music and surfing, what are your other passions?

Traveling. I am totally passionate about traveling the world and immersing myself in other cultures, becoming a part of foreign communities, learning their language, participating in their holidays and eating their food, living the way that they do! Doing so will really teach you a lot about the world, humanity, and life.

Traveling indeed is awesome! Did you already find your personal happy place?

I’ve lived in and been to so many other countries at this point that I don’t have one single happy place that I love most. I love it everywhere! I love the feeling of returning to a place that you haven’t been back to in a while. It’s like seeing an old friend. You’re going to be so happy to see it again, maybe emotional, maybe disappointed to see how it’s changed. I love the places that I’ve lived, and they’re all different and special in their own ways.

During your travels you loved busking in the streets. Are you still doing that?

I busked in the streets of St. Augustine, FL for a while in 2009 as a job. I was living on a boat and didn’t need a lot of money. I missed a flight out of England in 2010 and was stuck there due to the “ash cloud”. Flights weren’t leaving out of London Heathrow for weeks. I had no money so I borrowed a guitar, went into the town center and started playing. Europeans aren’t known to tip, but it was there in the town center that I was actually offered a real job! That was before I was booking gigs, so no, I don’t do that anymore. If it were to happen again, I’d be in bars trying to book gigs instead of playing in the street. Hahaha..

How does a typical day in your life look like?

Currently, I’m not really living my ideal life, as I was before. A typical day for me now is editing photos, creating videos for companies, working on my surf lifestyle website The Sirens Log, maybe writing a little music, maybe trying to convince myself to cook something healthy, checking the surf and lounging with my cat. If you’d asked me two years ago, I’d have said writing music, surfing, teaching a few surf lessons, surfing again, making a few acai bowls at the cafe, working on a painting, making a bit of jewelry, packing up and setting up for a show, and playing a show.

What are currently your personal and professional plans for the next years?

I currently live in my investment property, so I’m ready to sell it off and begin a new chapter in this crazy life! Maybe we’ll move to Puerto Rico, or maybe we’ll buy a big sailboat and sail away. Who knows. I would like to be ready for the WSL QS that’s coming up in November. I’ll be happy if I don’t get put out in the first heat! hahah.. I’d also like to release a few albums of some of my old music so that I can start pushing ahead with my new music, which I feel is a lot better. I’ve been on a three year hiatus with my music, so I’m excited to jump back in and start booking again!

Thank you so much for the interview, Siren!